By using our website, you confirm that you have reached 18 years old.
Got it!
7.0 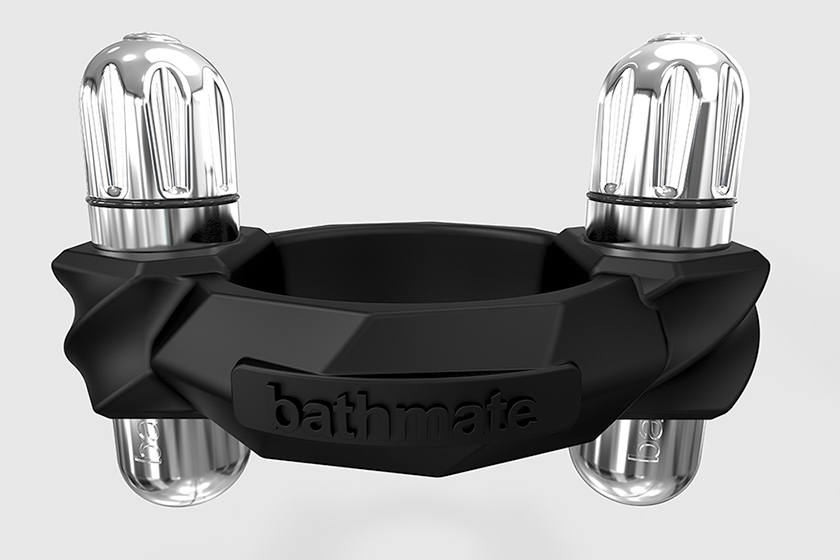 If you follow our blog, you may already know that I’m a huge Bathmate fun. If not, check my Bathmate review.

I’ve been pumping for about 18 months now and while Bathmate sessions are relatively short (15 minutes), it still gets boring sometimes. That’s why Bathmate developed HydroVibe – to make pumping sessions more fun.

While there are other benefits you can expect from this product like “release of serotonin and anti-pain chemicals like encephalin” and blah blah, the main idea behind HydroVibe is just to make your sessions more fun and pleasurable. So the question is: does it live to its promises? Let’s figure this out. 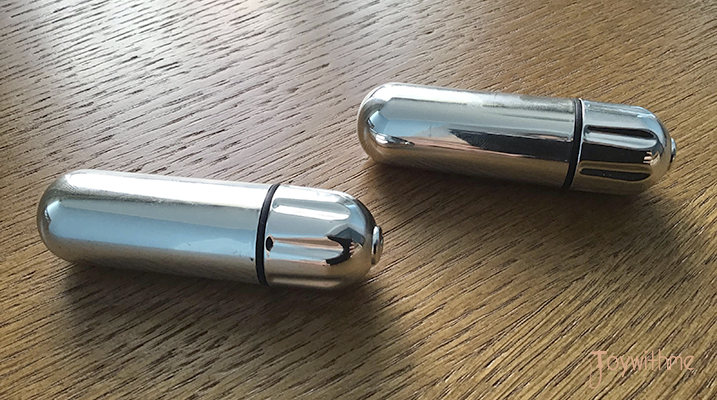 Basically, HydroVibe consists of a silicone ring and two bullet vibrators. The idea behind it is to pass the vibration through the water in your pump thus making your penis “feel good”. As HydroVibe adds kind of a “massage” effect to the session and helps to keep an erection inside the pump, in theory, you can expect better results.

Each vibe has 10 vibration patterns which results in 100 variations but honestly, I find it annoying when the vibes aren’t synced.

HydroVibe can work up to 1 hour on a 2-hour charge and is compatible with all Bathmate pumps except for HydroXtreme11. And it’s obviously waterproof. 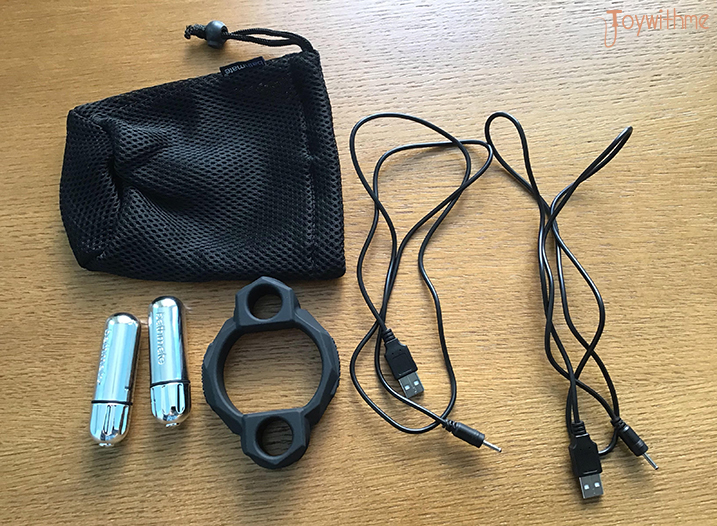 Hydrovibe came in a nice package which includes: a silicone ring, two vibes, two charging cables and a pouch. There isn’t much to say about the package as everything feels good quality. I especially love the pouch. Some people comment that vibrators feel cheap, but I can’t agree on that. Yes, they have a plastic casing, but it feels solid and sturdy. I even dropped them several times in the shower and there is no visible damage.

Bathmate HydroVibe arrives pre-charged but you can fully charge bullets before the first use just in case. In order to do so, you need to unscrew the top caps and plug the two bullets into USB ports. While charging doesn’t take too much time, it still occupies two USB slots instead of one so it may be a concern if you’re limited on those. 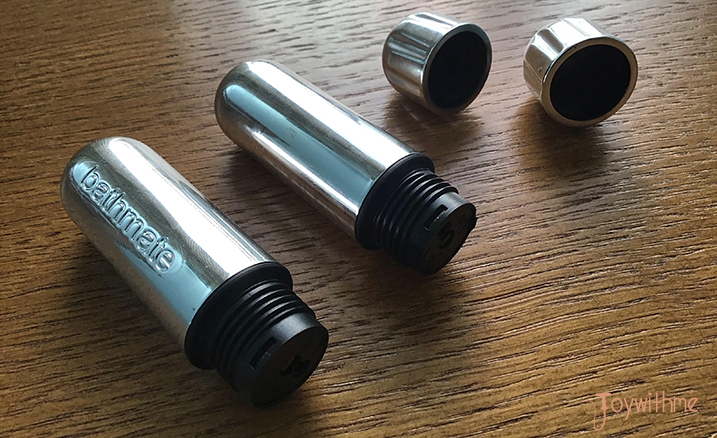 Before the first use, you also need to remove plastic spacers (you’ll notice them after unscrewing the caps), as the bullets will not work properly with them (and you won’t be able to properly seal the bullets). These spacers prevent HydroVibe from starting unexpectedly while in the package.

Now you are pretty much ready to start. Put the silicone ring on the Bathmate Pump, insert bullets on the sides and start the show. 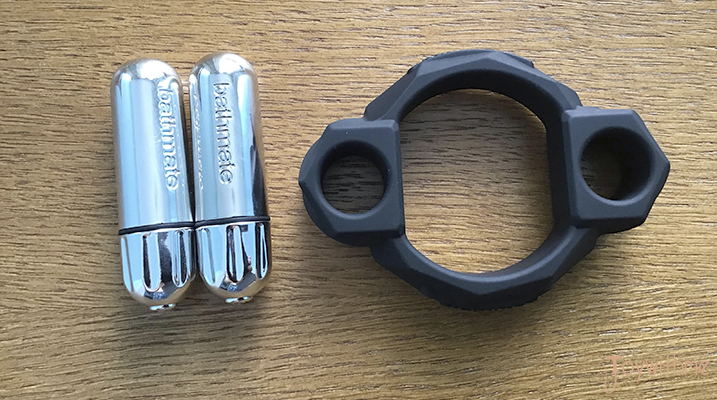 Each bullet has one button which lets you turn on and off the device and to change the vibration pattern. So when you are ready, just hold the button for a few seconds and the bullet will start on the first pattern. To cycle through different patterns just click the button. To turn off the vibe, hold the button for 2-3 seconds.

I must say that I took a while to test HydroVibe on different settings and different days of the pumping routine. Also, note that I’ve tested it in the shower so the experience in the bathtub may be different.

The first time I used HydroVibe, I was going for my traditional routine. At this point I do two sets, the first one is short (5 minutes) to just sort of warm-up, and the second one is longer (10 minutes) on maximum pressure I can achieve. And with HydroExtreme the pressure is very high.

During the first set, I wasn’t pumping to the max and the HydroVibe actually felt pretty good. You can feel the vibes through the water and it’s really a pleasurable feeling.

I had some problems with controlling the vibes though. It’s difficult to control them at the same time and if you accidentally put them on different vibration patterns, it may be difficult to sync them again so I usually had to turn them off and on again.

Now it was time for Act 2. I pumped to the max with the handball pump and started the vibes. And this time the feelings weren’t that pleasurable. First of all, when you pump with the handball pump, you reach the highest levels of possible pressure and there is almost no water left in the pump (at least in my case) and without water, vibrations are just transmitted through the plastic of the pump. In addition, these vibrations make your penis feel numb and decrease the sensitivity. And when pumping to the maximum, I want to be able to feel the slightest discomfort and it happens quite often that I have to release the pump a bit before 10 minutes mark. With these vibes, I just can’t tell if anything is wrong or if I feel any pain. Sure, if the things get critical, I’d probably know, but I’m a bit of a control freak and this is a con for me.

As you may have guessed, the first experience wasn’t the best. I’ve tried to use HydroVibe on the maximum pressure several times and the result was always the same.

Then I decided to remove the handball pump and do it the “old-fashion” way, like with a HydroMax. In this case, I wasn’t able to pump to my usual numbers and there was a lot of water left inside the pump, and in this case, the vibrations actually feel really nice.

So it’s probably good for the majority of users but in my case, I don’t feel any pleasure when pumping to the maximum with HydroExtreme. Also, obviously it adds vibration to the water around you when in the bathtub so I wonder how it feels. Maybe it changes the experience entirely but I don’t have a bathtub so I can’t tell.

Bathmate HydroVibe is definitely an interesting product and can make the sessions more fun for the majority of users. But if you’re using a handball pump and are going for maximum pressure, you should think twice. There is always a chance that it’s “only me” kind of thing but still, I’m rating the toy on my experience.

What Is a Penis Sleeve and How to Use It

The Best Thrusting Vibrators in 2021