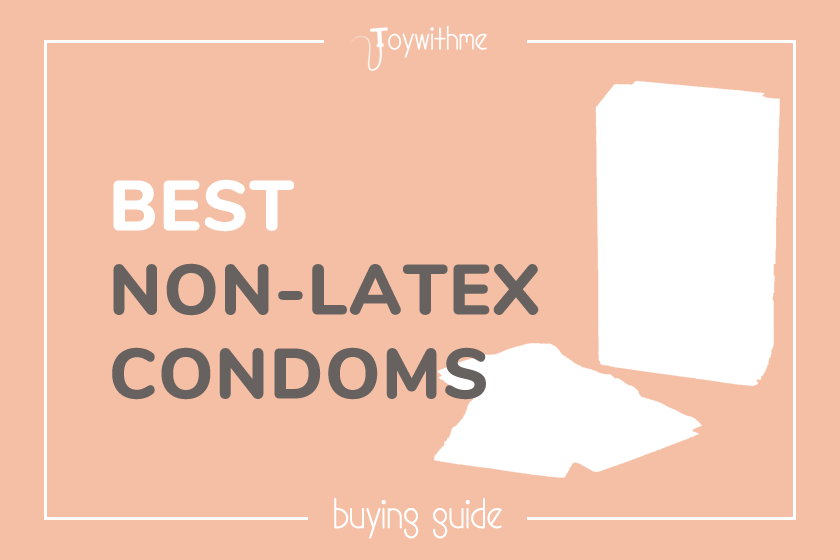 For people with latex allergies, finding a good condom can be a challenge. They’re often more expensive and sometimes don’t protect you from certain STD’s either. Luckily, this article is all about the best non-latex condoms, and is for everyone who’s allergic to latex, hates the smell/taste or just generally wants to try something different!

How to Choose The Best Non-latex Condoms

One of the first things that are mentioned when buying any kind of condom is thickness. Obviously, the thicker a condom is, the more it interrupts the sensation of sex. It’s best to go with a thinner model as long as it still offers sufficient protection to heighten sensitivity.

That being said, if you want (him) to last longer, then a thicker condom may be exactly what you need. Even if they aren’t advertised as a condom that makes you last longer, if they’re thicker they pretty much always do!

This is the main reason people even buy condoms and might be the most important one on this list. Some non-latex condoms only prevent pregnancy and don’t work to protect you against STD’s which may be a problem depending on your situation. Please keep this in mind as practicing safe sex is an important part of sex itself!

Depending on the material the condom is made out of, you will need a different kind of lube. Some materials do not react well to certain kinds of lube which can cause major issues with the condom’s safety. Luckily for you, most of the condoms on our list come pre-lubed and don’t need any more lubricant applied!

Stimulation is another big one, and a condom that’s slightly textured can make a big difference to how fast you or your partner can finish. This, paired with thickness, are two of the biggest factors when it comes to the amount of stimulation the condom will provide you with.

Not sure if you’re allergic to latex? This article helps you find out! 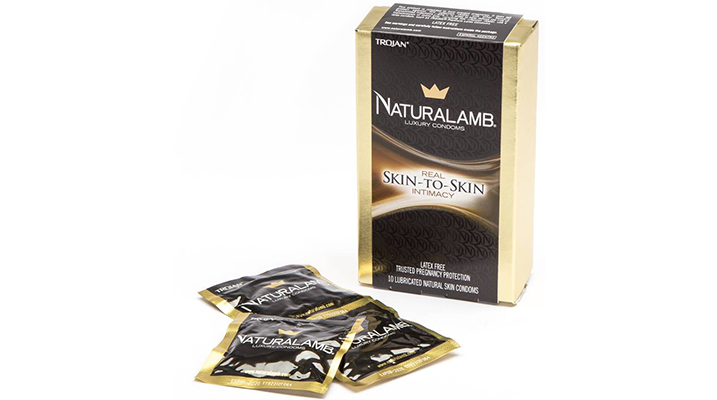 The first non-latex condom on this list is the Trojan Naturalamb. They are one of the luxury models on this list and boast a fantastic feel.

These non-latex condoms are made to feel much more like skin-on-skin contact when used compared to most latex varieties. With twelve condoms included in the pack, you can be sure to enjoy this feeling for a long time too.

They also come with a unique feature, which prevents the condom from slipping or moving during use. The Kling-Tite drawstring allows you to fasten the condom at the base of the penis to keep it sturdy and in-place.

The Trojan Naturalamb comes with lube pre-applied for a much more pleasurable experience. This also makes it more user-friendly in unplanned situations when you’re not quite ready to have kids.

That being said, it does not protect against STI’s which is a con compared to other condoms available. It’s also rather expensive compared to the others on this list which makes it less ideal.

The Condom with Extra Lubrication 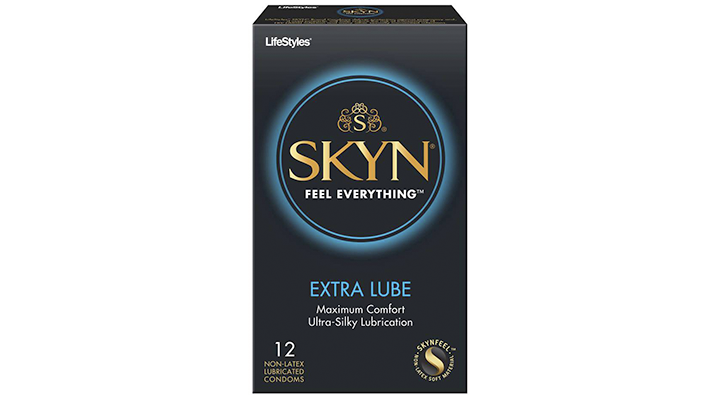 The LifeStyles SKYN Extra Lubricated Non-Latex Condoms are the second model on this list and they are a great choice for people with a latex allergy.

These latex-free condoms have some different features to the previous model. For starters, they come with extra pre-applied lubrication that ensures even more slipperiness and an easier fit.

This also makes this condom perfect for use on the go. It allows you to slip it on anywhere and use it without having to mess around with lube.

It’s made from SKYLFEEL which is the perfect alternative to latex and makes it great for people with allergies. This material has been used in a thin coat in order to provide a natural feel and makes the experience almost exactly like not wearing a condom at all!

The LifeStyle SKYN non-latex condoms are electronically tested and don’t come with a latex smell which makes use a whole lot more pleasant. They’re averagely priced compared to the other condoms on this list.

Pros: Extra pre-applied lubricant, great for use when out and about, ultra-thin, no strange smells

Cons: It doesn’t come with any special features like delaying his orgasm or speeding up hers

The Model Made of RealFeel Material 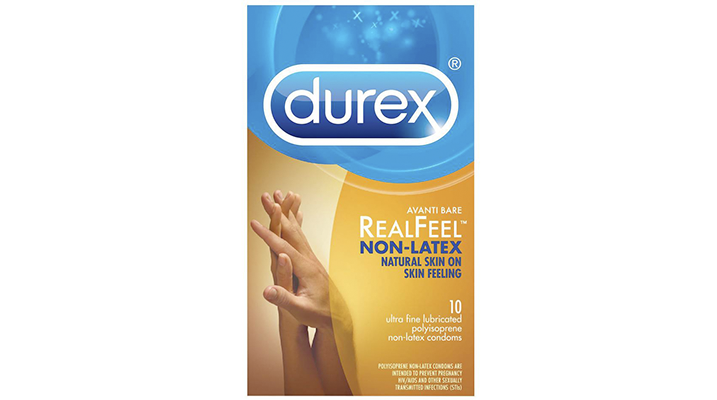 This condom is made of RealFeel material in order to provide a worldly experience to its users. This material that’s unique to Durex feels just like sex without a condom and this is the main reason why it’s so popular amongst users.

It’s suitable to anyone with a latex allergy too which makes it accessible to pretty much anyone. Being electronically tested, it’s also extra safe and you can rest assured that the condom has done the work it needed to.

The Durex Avanti Bare non-latex condoms heighten the sensation of sex and are perfect condoms for anyone looking for a great experience. They’re averagely priced compared to other options on this list.

Cons: Only comes slightly pre-lubed. More lube may be needed during use 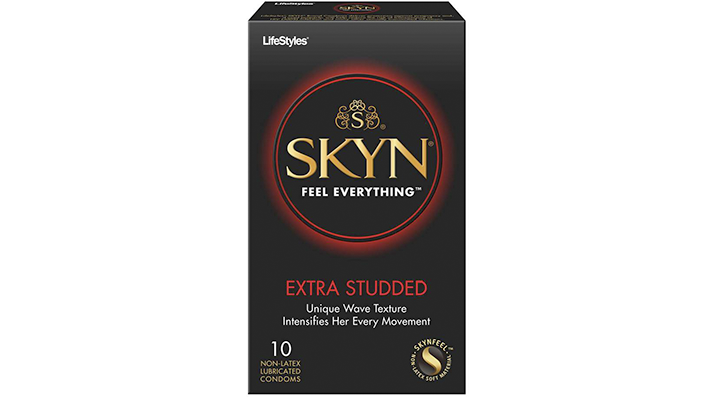 The LifeStyles SKYN Non-latex condoms are the next condoms on this list and they’re a stimulating addition to say the least!

These non-latex condoms are slightly different from the previous options as they boast a studded and textured feel. This helps to deliver more stimulation to her and kicks the sex into overdrive in the blink of an eye.

They also come pre-lubed which makes them the ideal condom for use outside of the house. No matter where you are, you can be sure that you’re ready for anything and can enjoy yourself without needing mess around with lube.

These condoms come in a regular fit and are suitable for most penis sizes. They’re also thoroughly tested and have been proven safe over and over again. These features combined with the fact they’re great for people with latex allergies make them suitable to pretty much anyone.

The LifeStyles SKYN non-latex condoms are priced averagely compared to the rest of this list and are a perfect option if you’re looking for a little more stimulation.

Cons: A little thicker than some of the other options on this list 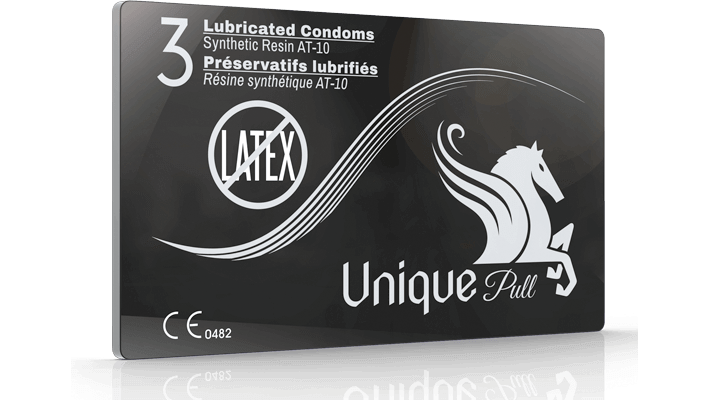 Second to last is the UNIQUE PULL, a condom that’s tailored towards normal to large-sized penises that has a couple of extra tricks up its sleeve.

If you’re sick of struggling to get the condom on the right way, or if you or your partner endlessly trying to force a condom on only to find out it’s on the wrong way, then this is the condom for you!

It comes with an easy-to-use packaging that helps you get the condom the right way around as well as roll it out effortlessly. It takes a little getting used to, but once you are used to it it’s an absolute breeze to put them on.

These condoms are also prelubed which make them great for use on the go. This, paired with the extra features that make the user experience effortless make for it to be one of the most user-friendly non-latex condoms on this list.

The UNIQUE PULL condoms are extra thin and are a perfect addition to your condom collection. They’re suitable for people with latex allergies and are on the slightly more expensive side of this list.

Cons: The added features take some getting used to which may cause you to waste a condom or two after first buying them 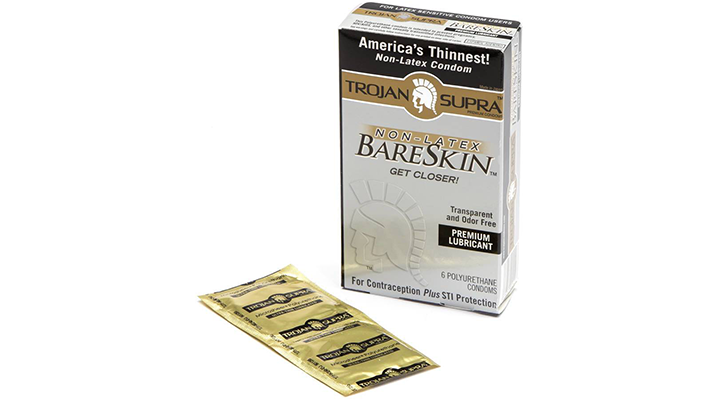 Last but not least is the Trojan Supra Condom. This condom is of a great value option and comes with multiple different features that make it stand out.

One of the first things that stands out when looking at these condoms is their thickness or lack thereof. They are extremely thin and when used boast a feeling of not wearing anything at all. This makes the sensations much more potent and ensures the experience is more pleasurable.

They come pre-coated in premium lubricant which not only makes the experience an absolute delight but also helps to make it possible to use them anywhere when needed.

Along with these wonderful features, these condoms are also odorless and tasteless which make them ideal for people who don’t like the smell or taste of normal condoms.

The Trojan Supra Condoms are one of the thinnest non-latex condoms on the market and they are great value for money too.

Cons: Can be a challenge to put on depending on how handy you are with them

As you can see, finding a good non-latex condom is easy once you know what to look out for. We hope that this article has given you the information you need to make the right decision and find a latex-free condom that’s right for you. And remember to have fun and stay safe!

Best Condoms for Lasting Longer in 2021

The Best Flavored Lubes in 2021

The Best Large Condoms in 2021

Best Condoms for Smaller Penises in 2021