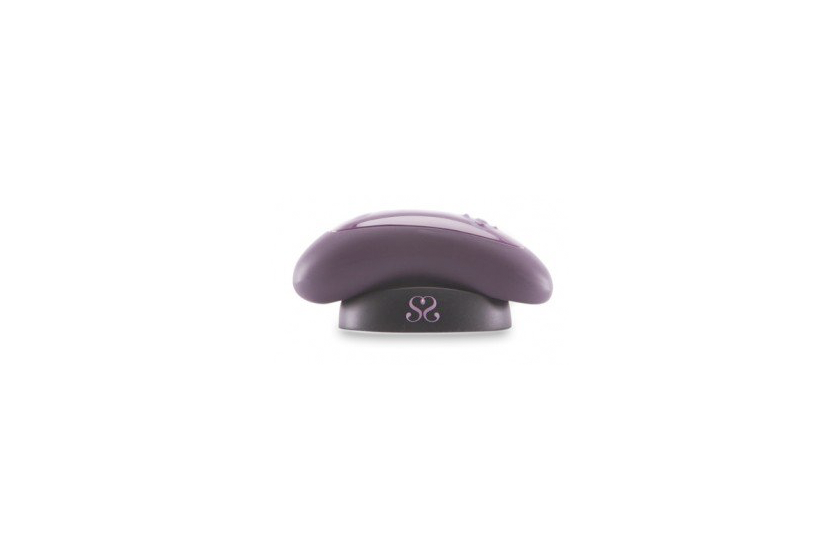 I have to tell you Toy with Mes that I am a girl who likes her foreplay and a little lickety of the split, if you know what I mean. In fact, without those appetizers to help get my juices flowing, I don’t really get off when we get to the main course. So when I opened this–my newest box of love–I was really, very excited in many ways. In fact, I think a little bit of pee came out. Or it was… well, never mind. Bottom line is that I was excited because inside the box I found the SaSi vibrator.

First off, this vibe looks like no other I’ve seen before. When I took it out of the box, for a second I thought, “Why did they send me a mouse?” (Not a rodent mouse, sillies, but a computer mouse. It looks like a wireless mouse!) It’s not even remotely phallic or “realistic,” nor is it shiny. You could leave it on your desk at work and no one would notice (not that I’m suggesting you do that, but you COULD).

One of the only things that look intriguing at a glance is that there’s a little nub sticking out of the bottom, poking up through a thin, satiny, rubbery skin. It’s kind of hard to describe. The nub is about the width of a penny (or a finger, or the tip of a tongue, come to think of it). Imagine stretching out a deflated balloon, and then pushing a finger up through it about a half inch. Not as sharp as a fingertip, it’s more like a knuckle.

What sets this vibe off from the others is that this “finger” has a bunch of motions it can do, like line shapes (side to side, up and down), J shapes, semi-circles, arcs, etc… the manual lists eleven. Not only can the movement type be specified, but also the speed (low, medium, high).

My husband had better watch out, because it actually learns and remembers the motions you like best! YES! IT DOES! It’s crazy, I know, but it’s completely true! I mean, my husband learns too, but even after fifteen years I’m still training him. And he often forgets stuff. Not so with this little beauty!

There are two modes: favorites, and customize.

Favorites mode holds five individual nub movement patterns. You cycle through the programs manually, by clicking on the left and right control buttons. Pressing the up or down buttons momentarily will adjust the speed of the nub, while holding them adjusts the pattern and speed of the vibe (which can be turned off if you just like the movement alone).

Customize mode is a little different: SaSi will automatically cycle through the eleven movement patterns for you. A very attentive and ingenious partner! Every twenty seconds it’ll change it up and start a different movement pattern. You can use the left and right buttons to skip to the previous or next patterns if you want. If you start to feel the magic, press the middle button and SaSi will keep and hold that movement until the big finale (or until the batteries die, at least). Once you’ve entered the “Don’t Stop” mode, SaSi remembers that pattern and it will be used as one of your five favorite most liked movements in the other mode.

You can switch between the modes at any time and as often as you like. However, to change modes you do have to power off the SaSi and power it back on again.

The SaSi is small and of an easily portable, discreet size (around 5 1/4″ x 2 1/4″ x 1 1/2″). Plus, like I said earlier, it doesn’t look like your standard sex toy. I can tell you it’s a hell of a lot easier to stash than a life-sized rubber fist, or a ten-inch-long two-inch-thick veiny cock and balls. I’m just sayin’.

The SaSi’s lithium-ion batteries are rechargeable via the provided adapter, so you never need to remember to buy any–or run out of spares at the worst moment. A full charge takes less than two hours and will run the toy for over an hour straight. The latex and phthalate-free water-resistant medical-grade silicone cover is removable in case you want to use soap and water to clean it, or if you want to change the color, or if it becomes damaged and needs to be replaced. Since it is silicone, you mustn’t use silicone based lubes with the SaSi: water or oil based only!

Now, you’re not going to get off in a millisecond with this toy–even on the “fast” movement settings, it’s not so much a sharp intensity as it is a deeper, more rhythmic stimulation. This is one partner that won’t complain that their jaw hurts or their tongue is tired and leave you hanging! So you’re going to have a nice, long, lovely time, building and building and building and clamping your eyes shut and clenching your muscles as you writhe with ecstasy until you just can’t stand it anymore and you finally…

I’m getting turned on again, so if you’ll excuse me, I have to go spend some quality time with my SaSi.

The Best Penis Extenders in 2021

The Best Quiet Vibrators in 2021

Best Sex Toys for Traveling in 2021