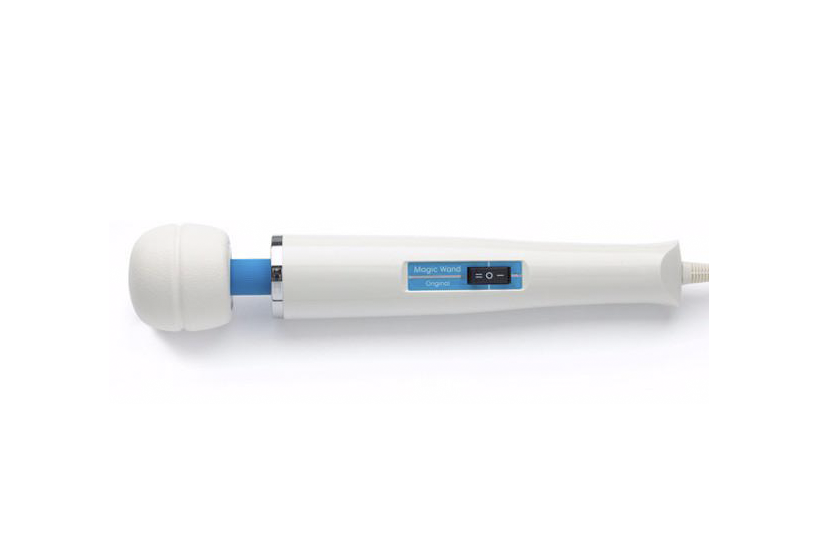 Take for example the Magic Wand Original, which used to be called the Hitachi Magic Wand. The Wand was originally designed as an electric “personal massager” and now retails for about $50.00. Not a bad deal when you consider that other products are well over $100, and you can’t even let your kids or neighbors see the packaging, which means you’re sneaking out to the garbage in the middle of the night like some kind of sex-crazed ninja. Awesome. With the Magic Wand, though, you’re just buying a muscle massager with pictures of people happily using it on tired necks and shoulders… what you do with it behind closed doors is another matter!

The Wand looks a lot like one of those 1980 karaoke microphones that you drunkenly sang into that night with the girls; a large round head with a narrowing grip down to the base where the cord for the plug comes out. The head is soft and spongy, so instead of a hard plastic pressure, you’re getting more of a soft point-of-contact backed by the power of a Harley-Davidson. You’ve now pretty much purchased sex-on-a-stick. Mazal tov! At some point, someone must have realized that there were additional uses for such a fantastic vibrating tool, and it has since gained cult status as one of the best and most effective clitoral good-time devices out there. That person should be found and Knighted. 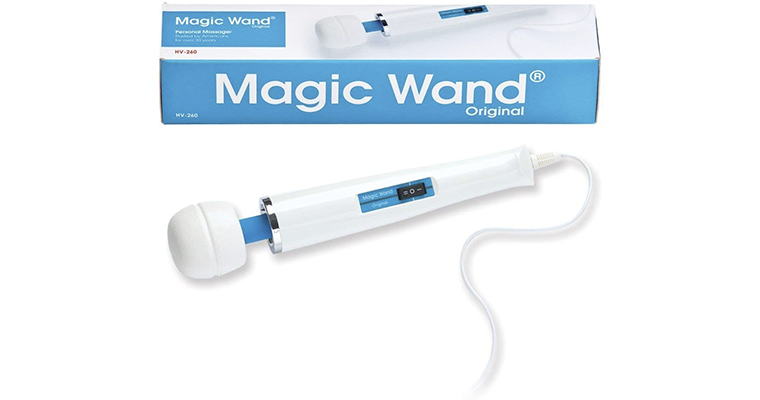 Let me recap: FANTASTIC orgasm tool, and so innocent looking that you can leave it lying around the bathroom without anyone raising an eyebrow.

The drawback? It is a plug-in, so you have to be somewhat close to an outlet. This means it’s also not safe in the tub, so don’t go trying to recreate those missing sex scenes from WaterWorld with this thing. Of course, the Wand makes up for it with the intense stimulation… this thing needs to be plugged in, because otherwise you’d go through batteries at a disturbing rate!

The Wand is out-of-the-box ready, so you don’t have to wait around for it to charge up (orgasm-on-the-go!), and is made from a combination of vinyl and plastic, which makes it easy to clean with warm, soapy water, and can be used with pretty much any lube. There are two speeds, “Mmmmmm” and “HOLY SHIT! I JUST SAW JESUS!” these can also be called “low” and “high.” I like my names better though.

The “low” setting is still good enough to gently stimulate the clit as well as the lips if you’re into more of a soothing orgasm. If you like those “rock your socks off, neighbors banging on the walls telling you to stop screaming, eyeball-rolling” orgasms, then go with the “JESUS!” setting, and go from zero to sixty in three seconds. Also, if you have a male partner, the low setting can be gently applied to the base of the scrotum between his thighs, and can provide lovely vibrations all the way through to his prostate. If he hasn’t offered to buy you a boat yet, he might after the Wand.

Speaking of neighbors banging on the walls, you may want to go somewhere insulated; this thing is loud and proud. Then again, are you really worried about killing the mood when orgasm number two comes rolling in? Yeah, me neither. Still, you’re not going to be able to whisper sweet nothings while the Wand is doing its job, so get somewhere where you can be good and loud, or learn how to shout, “JUST RUBBING MY BACK!” as you finish up.

Now, for those of you who want to feel the Magic Wand inside of you, but you don’t want to stretch yourself out like a contortionist at Cirque du Soleil, there are attachments which expand on the Wand’s uses. They’re listed as helping you get to those “difficult to reach places,” like between your shoulders, middle of your back, or, say, your G-spot. Good times!

The Magic Wand is a great toy to have in your “under the bed box of fun.” It may not be for everyday use, but after a rough day at the office or a long day with the kids, this is the toy you’re going to reach for to relax you… all over.

Material – Combination of vinyl and plastic
Width – 2 1/2″ spongy head
Length – 12″
Weight – A whopping 1.28lbs. – no worries though, the weight is mostly in
the head
Cord – 6′ in length
Charging – It’s electric! Boogy-woogy-woogy!
Colors – White

The Best Prostate Massagers in 2021